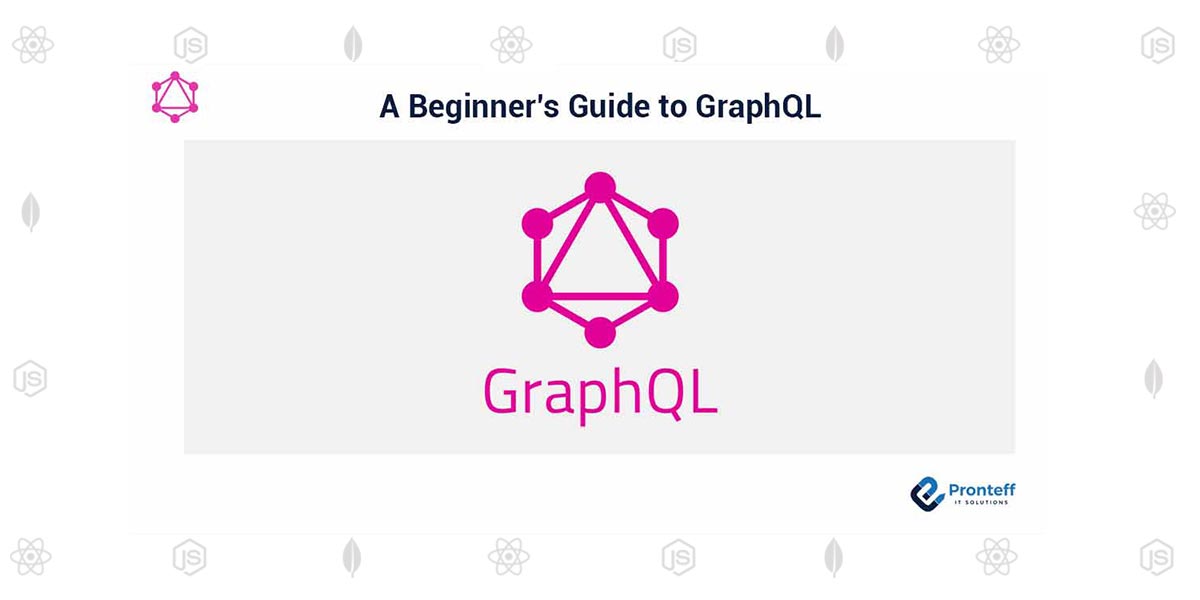 A Beginner’s Guide to GraphQL

One of the most commonly discussed terms today is the API. A lot of people don’t know exactly what an API is. Basically, API stands for Application Programming Interface. It is, as the name says, an interface with which people — developers, users, consumers — can interact with data.

You can think of an API as a bartender. You ask the bartender for a drink, and they give you what you wanted. Simple. So why is that a problem?

Since the start of the modern web, building APIs has not been as hard as it sounds. But learning and understanding APIs was. Developers form the majority of the people that will use your API to build something or just consume data. So your API should be as clean and as intuitive as possible. A well-designed API is very easy to use and learn. It’s also intuitive, a good point to keep in mind when you’re starting to design your API.

1) you’ll have a lot of endpoints

3) there is over- and under-fetching of information

To solve these problems, Facebook created GraphQL. Today, I think GraphQL is the best way to build APIs. This article will tell you why you should start to learn it today.

In this article, you’re going to learn how GraphQL works. I’m going to show you how to create a very well-designed, efficient, powerful API using GraphQL.

You’ve probably already heard about GraphQL, as a lot of people and companies are using it. Since GraphQL is open-source, its community has grown huge.

Now, it’s time for you start to learn in practice how GraphQL works and all about its magic.

What is GraphQL?
GraphQL is an open-source query language developed by Facebook. It provides us with a more efficient way design, create, and consume our APIs. Basically, it’s the replacement for REST.

You write the data that you want, and you get exactly the data that you want. No more over-fetching of information as we are used to with REST.
It gives us a single endpoint, no more version 2 or version 3 for the same API.
GraphQL is strongly-typed, and with that you can validate a query within the GraphQL type system before execution. It helps us build more powerful APIs.
This is a basic introduction to GraphQL — why it’s so powerful and why it’s gaining a lot of popularity these days. If you want to learn more about it, I recommend you to go the GraphQL website and check it out.

To start our project, we’re going to create a new folder and you can name it whatever you want. I’m going to name it graphql-server:

Open your terminal and type:

Now, you should have npm or yarn installed in your machine. If you don’t know what these are, npm and yarn are package managers for the JavaScript programming language. For Node.js, the default package manager is npm.

Inside your created folder type the following command:

Or if you use yarn:

npm will create a package.json file for you, and all the dependencies that you installed and your commands will be there.

Graphpack lets you create a GraphQL server with zero configuration. Since we’re just starting with GraphQL, this will help us a lot to go on and learn more without getting worried about a server configuration.

In your terminal, inside your root folder, install it like this:

Or, if you use yarn, you should go like this:

After Graphpack is installed, go to our scripts in package.json file, and put the following code there:

We’re going to create a folder called src, and it’s going to be the only folder in our entire server.

Create a folder called src, after that, inside our folder, we’re going to create three files only.

Inside our src folder create a file called schema.graphql. Inside this first file, put the following code:

In this schema.graphql file is going to be our entire GraphQL schema. If you don’t know what it is, I’ll explain later — don’t worry.

Now, inside our src folder, create a second file. Call it resolvers.js and, inside this second file, put the following code:

This resolvers.js file is going to be the way we provide the instructions for turning a GraphQL operation into data.

And finally, inside your src folder, create a third file. Call this db.js and, inside this third file, put the following code:

In this tutorial we’re not using a real-world database. So this db.js file is going to simulate a database, just for learning purposes.

Now, if you run the command npm run dev or, if you’re using yarn, yarn dev, you should see this output in your terminal: 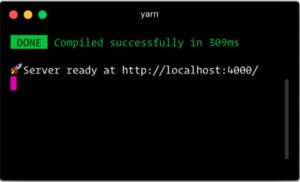 You can now go to localhost:4000 . This means that we’re ready to go and start writing our first queries, mutations, and subscriptions in GraphQL.

Schema
GraphQL has its own type of language that’s used to write schemas. This is a human-readable schema syntax called Schema Definition Language (SDL). The SDL will be the same, no matter what technology you’re using — you can use this with any language or framework that you want.

This schema language its very helpful because it’s simple to understand what types your API is going to have. You can understand it just by looking right it.

Types are one of the most important features of GraphQL. Types are custom objects that represent how your API is going to look. For example, if you’re building a social media application, your API should have types such as Posts, Users, Likes, Groups.

Types have fields, and these fields return a specific type of data. For example, we’re going to create a User type, we should have some name, email, and age fields. Type fields can be anything, and always return a type of data as Int, Float, String, Boolean, ID, a List of Object Types, or Custom Objects Types.

So now to write our first Type, go to your schema.graphql file and replace the type Query that is already there with the following:

But, what about those ! at the end of every line? The exclamation point means that the fields are non-nullable, which means that every field must return some data in each query. The only nullable field that we’re going to have in our User type will be age.

In GraphQL, you will deal with three main concepts:

We’re going to create our first type Query in GraphQL. All our queries will end up inside this type. So to start, we’ll go to our schema.graphql and write a new type called Query:

It’s very simple: the users query will return to us an array of one or more Users. It will not return null, because we put in the ! , which means it’s a non-nullable query. It should always return something.

But we could also return a specific user. For that we’re going to create a new query called user. Inside our Query type, put the following code:

As you see, with queries in GraphQL we can also pass arguments. In this case, to query for a specific user, we’re going to pass its ID.

But, you may be wondering: how does GraphQL know where get the data? That’s why we should have a resolvers.js file. That file tells GraphQL how and where it’s going to fetch the data.

Now, we’re going to create our first Query. Go to your resolvers.js file and replace the hello function. Now your Query type should look like this:

Now, to explain how is it going to work: Each query resolver has four arguments. In the user function, we’re going to pass id as an argument, and then return the specific user that matches the passed id. Pretty simple. In the users function, we’re just going to return the users array that already exists. It’ll always return to us all of our users. Now, we’re going to test if our queries are working fine. Go to localhost:4000 and put in the following code:

It should return to you all of our users.

Or, if you want to return a specific user:

Now, we’re going to start learning about mutations, one of the most important features in GraphQL.

Mutations
In GraphQL, mutations are the way you’re going to modify data on the server and get updated data back. You can think like the CUD (Create, Update, Delete) of REST.

We’re going to create our first type mutation in GraphQL, and all our mutations will end up inside this type. So, to start, go to our schema.graphql and write a new type called mutation:

As you can see, we’re going to have three mutations:

createUser: we should pass an ID, name, email, and age. It should return a new user to us.

updateUser: we should pass an ID, and a new name, email, or age. It should return a new user to us.

deleteUser: we should pass an ID. It should return a new user to us.

Now, go to our resolvers.js file and below the Query object, create a new mutation object like this: 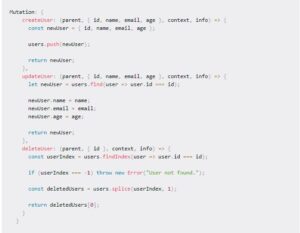 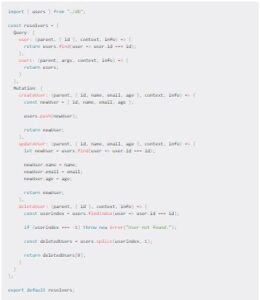 Now, we’re going to test if our mutations are working fine. Go to localhost:4000 and put in the following code:

It should return a new user to you. If you want to try making new mutations, I recommend you to try for yourself! Try to delete this same user that you created to see if it’s working fine.

Finally, we’re going to start learning about subscriptions, and why they are so powerful.

Subscriptions
As I said before, subscriptions are the way you’re going to maintain a real-time connection with a server. That means that whenever an event occurs in the server and whenever that event is called, the server will send the corresponding data to the client.

By working with subscriptions, you can keep your app updated to the latest changes between different users.

You will say it’s very similar to a query, and yes it is. But it works differently.

When something is updated in the server, the server will run the GraphQL query specified in the subscription, and send a newly updated result to the client.

We’re not going to work with subscriptions in this specific article, but if you want to read more about them click here.

As you have seen, GraphQL is a new technology that is really powerful. It gives us real power to build better and well-designed APIs. That’s why I recommend you start to learn it now. For me, it will eventually replace REST.

Thanks for reading the article.