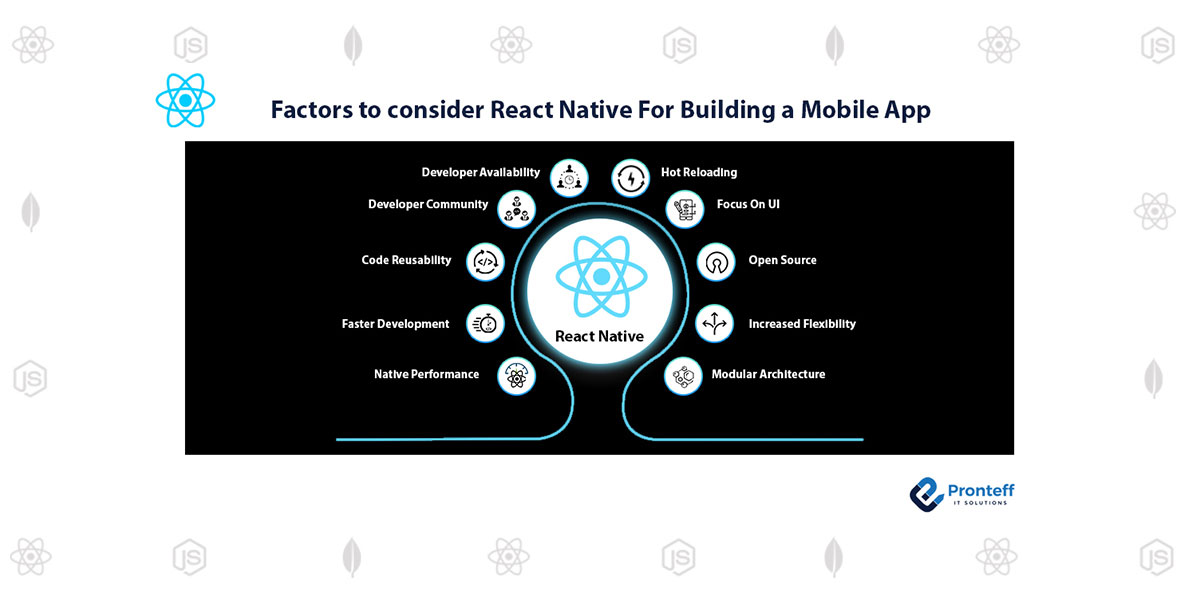 Factors to consider React Native For Building a Mobile App

React Native efficiency, time-to-market, maintenance costs, and viability of your mobile app are all influenced by the framework you use to create it. As a result, choosing a framework for your mobile app is one of the most crucial decisions you can make. it is a popular framework that is frequently used by organizations today. In this blog post, we’ll go through the top ten reasons why you should choose this framework to build your mobile app.

The fact that React Native takes less time to develop is one of the main reasons why it appeals to so many developers. React Native provides us with a number of pre-built components that can help reduce your product’s development time and time-to-market. However, because this framework does not include all of the components that are currently available, you will have to create some of them from yourself.

Another appealing feature of this framework is that it is built on JavaScript and has a growing developer community. As a result, React Native provides developers with a large variety of packages that allow them to locate pre-built components for almost any solution.

It renders its UI using native APIs and an asynchronous bridge that executes JS code on a different thread without interrupting the UI rendering. As a result, the performance of apps produced with this framework can be compared to that of native Android or iOS apps.

Reusability of programming is another nice feature of React Native. This allows us to reuse isolated components without affecting the rest of the system. Because Its components are segregated, we can manage updates very easily.

Because it is a Facebook product, React Native is one of the most popular mobile app development frameworks. Due to Facebook’s decision to make React Native open-source, any developer can use it and contribute to the framework’s development.

You won’t need to hire two separate developers to create apps for Android and iOS thanks to React Native. Furthermore, hiring two separate teams for iOS and Android can lead to confusion and impede communication among development teams. This is due to the fact that they often develop at different rates, making it difficult to keep them in sync. As a result, two projects can easily become unstable, resulting in inconsistencies in the functionality, features, and UI of your app. Because React Native is based on JavaScript, you can leverage existing front-end developers to create mobile apps with it. This is because developers who are already familiar with JavaScript may quickly pick up this framework and apply their web development expertise to mobile app development. If your in-house team is lacking in engineers with JavaScript framework experience, you can expand your team by hiring react native developers. It is preferable to recruit React Native developers from an offshore software development business in India if you want to speed up your mobile app development by onboarding quality talent at lower hourly rates.

For most developers, debugging native apps is a tedious task. However, because React Native allows hot reloading, debugging apps built with it is much easier. This feature allows you to see the changes you made to your code in real-time while the app is still running. This tool helps you save time and be more productive.

This framework has been made open-source by Facebook, allowing you to use its libraries for free. Because this framework is licensed under the MIT license, you won’t have to make the source code public in order to reuse it, and you’ll have more freedom to modify the software you’ve created under any license.

Because of this framework’s greater flexibility, you can easily continue working on a React Native app that has been abandoned by other developers. This makes it simple for you to update your mobile app and boosts the flexibility of your staff.

The architecture of React Native is modular. The functionality of a system is divided into modules under this design. These modules are frequently interchangeable and self-contained. The ability to upgrade and update apps more quickly is one of the key advantages of employing this architecture. Additionally, you can These modules can be used in both mobile and web APIs.

Types Of For Loops Statements In Javascript
October 5, 2021