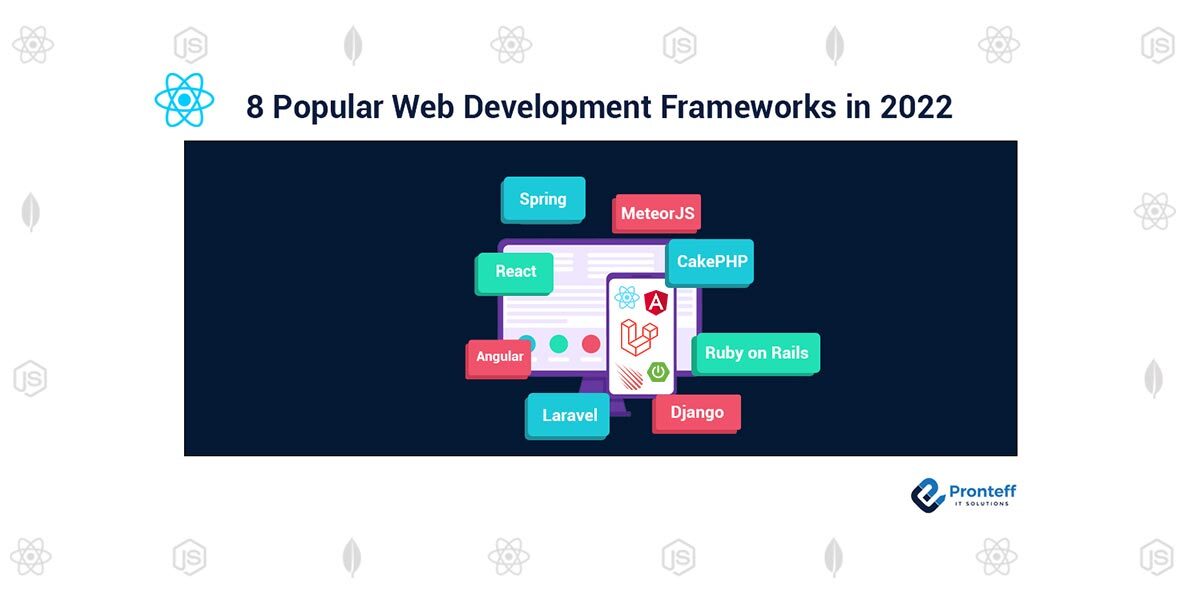 Although React is a JavaScript library, it is regarded by many developers as a framework. React was the first framework to use a component-based architecture, ahead of Angular, Vue, and many others. React is simple to utilize on both the client and server sides. It was created by Facebook and is utilized by both Facebook and Instagram.

It is a typescript-based frontend framework that specializes in constructing rich single-page applications. It assists a developer in finishing all client-side apps. Angular 1. x utilized JavaScript at first, but later versions switched to typescript, which is a subset of JavaScript. It’s SEO-friendly, and its size is modest compared to other frameworks, making it simple to optimize.

It is the most popular backend web development technology or web framework. It’s a PHP framework that’s open-source and free. Model-view-controller (MVC) architecture is used by Laravel. The Laravel framework is used to build websites such as social networking, news, and blogging.

It is an open-source Python framework. Python’s syntax is simple and devoid of symbols that can clog up a language. Django uses the Model-View-Template (MVT) architecture. Django is used to create data-driven and difficult-to-use websites. Popular websites such as Instagram, Disqus, and Nasa employ the Django framework. The Django framework is used by about 12,790 websites.

It is written in Java, which is a popular programming language among programmers. It’s a Model-View-Controller framework that’s utilized by sites like Wix, Ticketmaster, and others. Its siblings assist you in improving its performance. Java is a challenging language to master, yet it offers a wide range of job opportunities.

It is a popular programming language that makes it easier for developers to manage both the front-end and back-end of an application. It can also be combined with Node.JS to create real-time apps for a variety of platforms. It’s a full-featured javascript framework for developing single-page applications. Developers can mix and match this language, which comes with a wealth of resources. Big firms, such as Reddit, have created their websites utilizing this technology.

It is a popular PHP web development framework that is free and open source. Model-controller-view and association data mapping are used. In a systematic fashion, web apps are simple to create. There is a wealth of coding information available on the internet that is simple to implement.

It is a Ruby language-based open-source framework. It’s a server-side framework related to Rapid Application Development (RAD) that encourages code reuse. It’s one of the most popular frameworks among programmers, and it’s a lighthearted language that brightens up the programmer’s day. Ruby on Rails is used by well-known companies like Airbnb and Hulu to build their websites. It’s completely free and runs on Linux. It enables you to seamlessly transition from the planning to the execution stages. In comparison to other technologies, it is quick and simple to use.