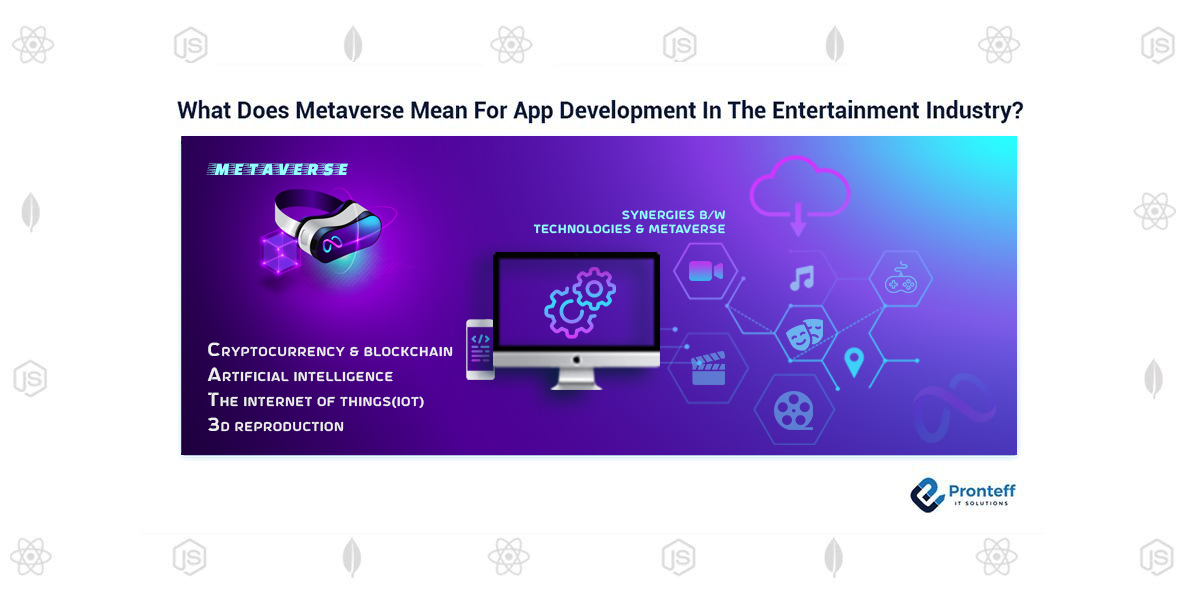 What Does Metaverse Mean For App Development In The Entertainment Industry?

Since Facebook brought Metaverse to the forefront, a number of brands and businesses have expressed interest in developing seamless media and entertainment apps leveraging the technology. Let’s take a look at what Metaverse entails in terms of entertainment app development.

A new word metaverse is causing a stir in the IT industry. Following Facebook’s announcement of Meta, a new umbrella business that would drive Metaverse technologies to improve social interactions,
However, whether it can transform the physical world into virtual realities raises various difficulties.

Let’s look at how the Metaverse affects the creation of flawless entertainment apps.

In 1992, Neil Stephenson’s sci-fi novel Snow Crash gave birth to the Metaverse. The narrative of the novel revolves around the idea of the physical world being habitable and the ability to travel to a digital realm via virtual reality.

it is a platform where physical and virtual realities collide, according to Facebook. This integration allows for end-to-end interaction and fully digitalized workplaces.

Users of AR and VR services will be able to experience something that defies the laws of physics. These real-world experiences can be replicated in the Metaverse for working, walking, jogging, and other activities.

In a nutshell, the Metaverse is a virtual land and object-filled online 3D digital universe. Imagine a world where you can work from home, visit virtual showrooms to buy a new sports vehicle, or attend an event hosted by your favorite band.

Many visionaries believe that the current version of the internet is riddled with inconsistencies and unfixable flaws. According to them, the Metaverse might be the tying band that accommodates interoperable, multi-tactile, and commercially viable conditions.

Facebook isn’t merely the poster child for the metaverse concept, as we’ll see later in this essay. These Virtual Reality conditions, in fact, follow well-defined tactics for mainstreaming the media and entertainment app development industry.

Let’s have a look at the two most distinguishing characteristics of a Metaverse as a platform:

The Metaverse-based entertainment app development solutions have the ability to build a space that is identical in time and dimension to reality. The Metaverse invention would allow sections of AR and VR to communicate with one another. In the real world, associations can be visual, aural, or dynamic. For a progressive partnership, a Metaverse stage expresses interactions along similar lines.

The creation of media and entertainment apps based on the Metaverse should be interoperable. It alludes to a greater level of collaboration between at least one Metaverse platform (s).

The development of Metaverse applications relies on a variety of cutting-edge technologies that have yet to be tested.

Depending on who is designing the app, metaverse provisions lead to some restrictions on open-ended experiences. A Metaverse startup or a massive organization might be the developer.

There are plenty of toolboxes available to bring this future reality to life. Unreal Engine, Unity, Amazon’s Sumerian, Blender, and Maya are some of the developer toolkits available.

Let’s have a look at some of the technologies that could be used in conjunction with Metaverse to develop a seamless media and entertainment app.

Synergies Between Technologies and the Metaverse

There was a moment when cryptographic types of money competed for a larger proportion of economic and real-world uses. The good news is that the presence of a virtual platform is assisting digital currency in incentivizing the selling and acquisition of virtual resources using AR VR technology.

To establish possession and legality, Non-Fungible Tokens (NFT) are utilized. Once the Metaverse is up and running, blockchains can legitimate crypto’s storage capacity, stability, and mobility.

Blockchains have demonstrated their interoperability, durability, and adaptability, all of which are KPAs that the future of VR innovation desperately requires. They will be the mechanical support for cryptocurrency and digital resource custodianship.

Artificial Intelligence (AI) has been increasingly used in our daily lives in recent years: business methodology engineering, decision-making, facial recognition, faster computing, and that’s just the beginning. Lately, AI experts have been focusing on the potential results of using AI for the creation of vivid metaverses, resulting in exceptional media and entertainment app development solutions.

3. The Internet of Things (IoT)

Data collection and distribution from the physical world is one of Metaverse’s IoT uses. It would improve the accuracy of digital representations. For example, IoT data feeds could change how particular metaverse things work based on current weather or other conditions.

Implementing IoT can seamlessly connect the 3D environment to a plethora of entertainment apps and real-world devices. It allows for the fabrication of infinite recreations in the metaverse. IoT might also use AI and machine learning to process the data it collects in order to improve the metaverse’s environment.

While not a new concept, 3D Reproduction was used during the pandemic, particularly in the real estate industry, as lockdowns prevented potential buyers from visiting houses in person. Following that, a few companies embraced 3D replication technology to create virtual property tours. Purchasers might look at potential new homes from anywhere and make purchases without ever setting foot inside, much like in the Metaverse we imagined.

One of the Metaverse’s challenges is to create a computational climate that appears as close to our natural environment as possible. It may create reasonable and normal-looking spaces with the use of 3D reproduction. We can bring our world online by giving exact 3D photorealistic models of architecture, genuine regions, and more, thanks to amazing 3D cameras.

The 3D spatial data and 4K HD pictures are then sent to PCs, which process them and generate a virtual replica for clients to see in the Metaverse. Computerized twins are another term for these virtual replicas of real-world articles. Such apps will be a big hit in the future.

Is there anything difficult about creating a metaverse app?

The Metaverse is currently in its early stages. Two concerns have arisen: identity verification and security management. In reality, differentiating oneself is quite simple. As people explore the digital world through their personas, it will be difficult to tell or explain who the other person is. Unwanted individuals or bots, for example, could enter the metaverse and impersonate others. They could then use this to harm their reputation or deceive other customers as a result.

Security is another test. The Metaverse relies on AR and VR devices to provide a realistic experience. These advances in camera capabilities and unique identities may result in unwelcome gaps in individual data.

Several companies have already begun to investigate the Metaverse’s potential. It’s critical to put your faith in a seasoned entertainment app development company.