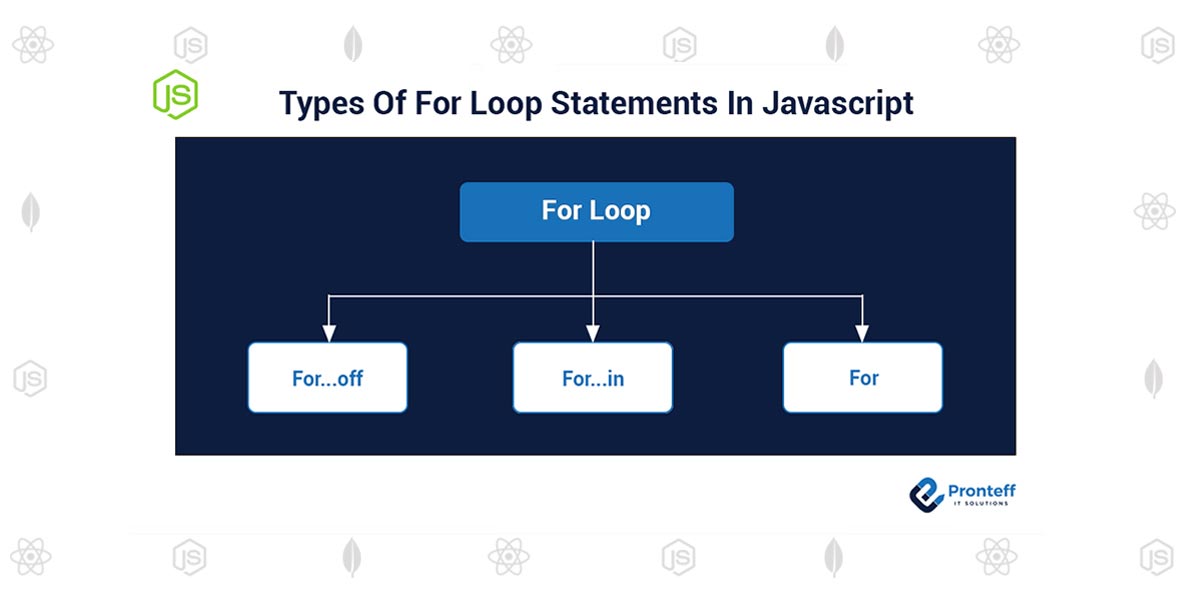 Three Types of Loop statements for Javascript As Follows:

For Loop statements for Javascript:

The syntax for For loop Javascript:

An expression is to be evaluated at the end of each loop iteration. This occurs before the next evaluation of the condition. Generally used to update or increment the counter variable.
statement

More Examples on For Loop statements for Javascript

For in Loop statements for Javascript:

The syntax for For..in loop Javascript:

for (variable in object) {
statement
}

A different property name is assigned to the variable on each iteration.

Object whose non-Symbol enumerable properties are iterated over.

A for…in loop iterates over the properties of an object in an arbitrary order (see the delete operator for more on why one cannot depend on the seeming orderliness of iteration, at least in a cross-browser setting).

If a property is modified in one iteration and then visited at a later time, its value in the loop is its value at that later time. A property that is deleted before it has been visited will not be visited later. Properties added to the object over which iteration is occurring may either be visited or omitted from iteration.

Note: for…in should not be used to iterate over an Array where the index order is important.

Because the order of iteration is implementation-dependent, iterating over an array may not visit elements in a consistent order. Therefore, it is better to use a for loop with a numeric index (or Array.prototype.forEach() or the for…of loop) when iterating over arrays where the order of access is important.

Iterating over own properties only

If you only want to consider properties attached to the object itself, and not its prototypes, use getOwnPropertyNames() or perform a hasOwnProperty() check (property Is Enumerable() can also be used). Alternatively, if you know there won’t be any outside code interference, you can extend built-in prototypes with a check method.

Given that for…in is built for iterating object properties, not recommended for use with arrays, and options like Array.prototype.forEach() and for…of exist, what might be the use of for…in at all?

It may be most practically used for debugging purposes, being an easy way to check the properties of an object (by outputting to the console or otherwise). Although arrays are often more practical for storing data, in situations where a key-value pair is preferred for working with data (with properties acting as the “key”), there may be instances where you want to check if any of those keys hold a particular value.

The syntax for For..off loop Javascript:

for (variable of iterable) {

On each iteration, a value of a different property is assigned to a variable. variable may be declared with const, let, or var.

An object whose iterable properties are iterated.

More Examples on For Loop statements for Javascript