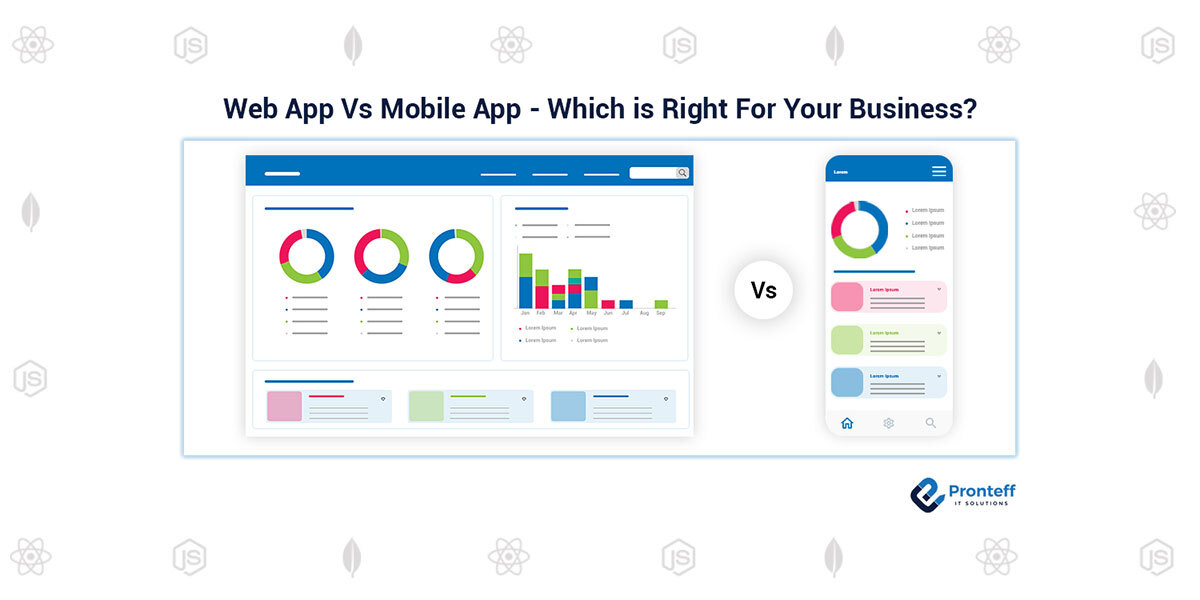 Web App Vs Mobile App – Which is Right For Your Business?

When it comes to advertising, businesses all over the world see the digital area as the new real estate. Furthermore, Web Apps are employed as essential retail and engagement points with customers. When mobile phones are viewed more than PCs or even television sets, it is evident that applications are more significant.

Despite the fact that all applications appear to be the same, they are classified into two categories: mobile apps and web apps. Both are quite different in terms of how they are built and how they interact with users’ devices. This blog will explain the differences between mobile and web apps and assist you in determining which type is ideal for you.

Mobile applications are the most straightforward route to establishing a substantial digital presence for most businesses. These can be found in the App Store (for iOS devices) or the Play Store (for Android devices) (for Android devices). They are extremely safe and secure because they have been approved by the retailers. The difficulty in obtaining approval is one disadvantage for developers. Furthermore, users must manually install any and all updates that the apps may require at any moment.

The most frequent type of mobile app is native apps. They are typically built from the ground up for a certain operating system or platform, such as Apple’s iOS or Google’s Android. For Swift and Objective-C development, Apple provides the Xcode IDE, whereas Android provides Android Studio for Java and Kotlin development.

Developers can leverage Apple and Google’s development tools, interface components, and software development kits (SDKs) to create native mobile apps. Out of all the options listed here, developing native apps is the most expensive. So, it is particularly appropriate for organizations that have enough money to invest in constructing an app for each unique platform they wish to have an app for.

The most popular hybrid mobile app development platforms are Flutter, React, Native, and Ionic. They enable developers to work with a single codebase that works across all operating platforms. As a result, this is a more appealing alternative for startups and small and medium businesses, as they may save money by developing only one version of their desired software.

Additional information Learn everything there is to know about cross-platform and native apps.

Web applications resemble smartphone apps in appearance, however, they are simply redesigned websites. They’re also designed to be more responsive and dynamic in terms of updates. As a result, updating them does not involve any effort from the user. These are more popular because they can be accessed straight from any browser on any platform.

Users of mobile phones often install a small number of apps on their devices (such as social media apps, music apps and games). Web apps are accessible and appealing because they are not available for download on any app store. (Online forms, spreadsheets, Gmail, file converters, and other web tools are examples.)

However, because they did not have to go through the arduous process of obtaining approval from a store, they may be less safe and secure than mobile apps. Mobile apps have access to devise features such as the camera, microphone, GPS, and so on, whereas web programs do not. Another disadvantage of online apps is that they require an Internet connection to operate, whereas mobile apps may mainly be used offline.

Do you require support with web application maintenance and development? We can provide you with skilled Web app developers.

Progressive web apps are thought to combine the finest features of both mobile and online apps. PWAs are in the middle of the two in terms of functionality, as they strive to give mobile app features through a web browser. PWAs seek to provide a native-app-like look and experience without having users download or install any software.

While web apps consume a significant amount of network data, PWAs can be utilized offline thanks to modern browsers’ application cache features (though use is limited when compared to the offline functionality of native apps).

PWAs, like web apps, are less expensive to create and update in real-time. They are, nevertheless, written in high-level code.

Though developing an app may appear to be the logical next step in attracting and maintaining more customers, each company must carefully consider what type of app will best fit their objectives (in terms of their budgets, customer habits, goals, and requirements). Depending on these factors, different types of apps provide varied benefits in terms of attracting and retaining clients.