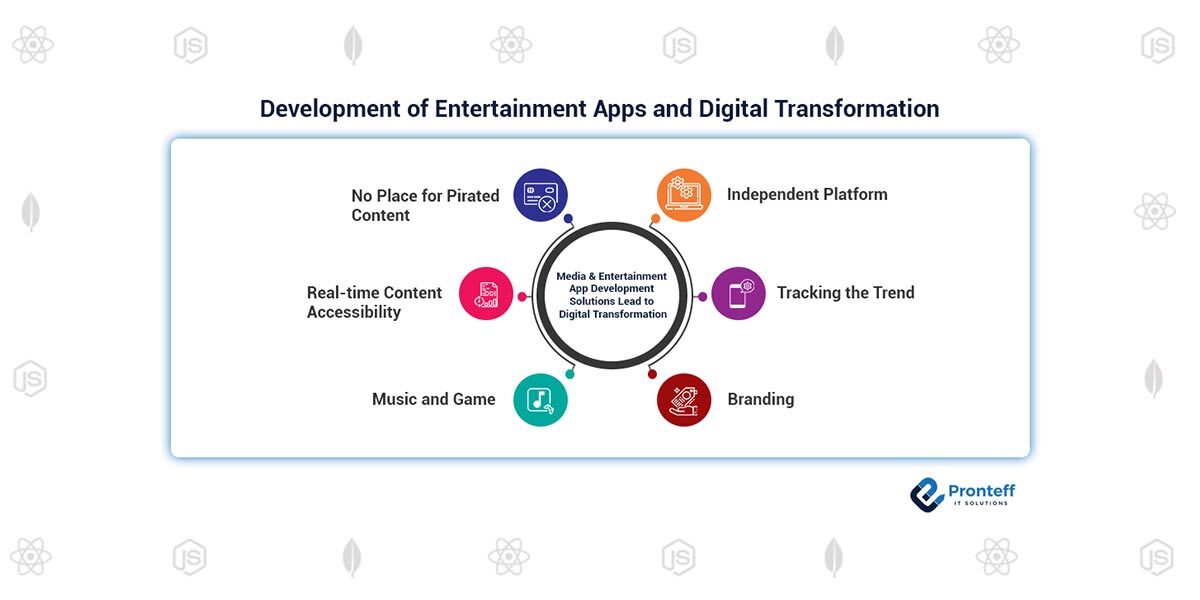 With our ever-changing lifestyles and demanding schedules, the sources of entertainment are rapidly altering. Nobody waits in line to get the latest news and scores from their favorite sport or sits in front of their television sets to watch their favorite show.

Because entertainment app development has digitally revolutionized the condition of the industry, each of these has become a possibility.

Custom mobile app creation services in the United States enable us to get what we want when we want it and have revolutionized the way we consume entertainment.

The smartphone app store is referred to in the modern era as a wish-granting genie with an app for everything. Everything is at your fingertips, whether you want to learn a new recipe, keep track of your fitness objectives, or book a hotel room.

Entertainment app development solutions aren’t far behind, and there’s a burgeoning market for various media apps in both the Google Play Store and the Apple App Store.

With a larger consumer base and significant demand for such apps, entertainment app development aids and leads to digital transformation.

It enables a company to communicate with its target audience in a stimulating environment, boosting their insights and satisfaction while maintaining visibility and accessibility.

The COVID 19 pandemic has accelerated the creation of media and entertainment apps. According to the Inmobi survey, 18% of respondents aged 18-25 say they are spending more money on entertainment, while 40% say they are investing more time in gaming apps.

Let’s have a look at how entertainment and media app development is bringing digital change to the entertainment business and changing its face.

What Role do Media and Entertainment App Development Play in Digital Transformation?

Entertainment app development has evolved into an independent platform for music, live streaming, films, TV shows, web series, and much more in just a few years.

It has not only recently provided a respite from people’s stressful schedules, but it has also created more and better opportunities for artists and rising talents to connect and gain a reasonable audience—and hence glory and financial rewards.

As social media grows in popularity, so does the importance of paying attention to the target demographic and tracking crucial patterns.

It has a significant impact on the media and entertainment industries. The crucial trends assist them in demonstrating the content release and curation process, as well as demonstrating what their target audiences are interested in. A win-win situation for all parties!

The digital transformation of media outlets is rapidly gaining traction among companies as a key platform for entertainment and media app development.

The larger the target segment for an application, the more opportunities businesses have to sell their product philosophy.

According to a Google study, 55 percent of people who use entertainment apps do so while relaxing, providing marketers with a great window to communicate their message in engaging ways because crowds are more likely to focus on the brands.

Games and music are two important aspects of entertainment app development that will help these apps succeed.

Gaming, which was once restricted to gaming parlors and control centers, has been transformed into a crowd-pleasing experience thanks to media and entertainment app development solutions.

Users can also talk with other players, share real-time competitive scores with their pals, make audio calls, and so on, which keeps existing users happy and attracts new ones.

Essentially, the music industry, which once relied solely on CDs and radios, has evolved into a key component of entertainment apps. This also solves the problem of accessibility, as people can listen to music anytime they want.

Unlike in the past, entertainment has long transcended geographical boundaries and reached every corner. Digital transformation plays a significant part in this.

Players with high-quality content and a pre-defined target audience can enter the market fast and launch their own businesses. If media and entertainment app development is done appropriately, such apps have a high success rate.

The pace of piracy is declining and leveling off as more digitization enters the market. This puts the content creator in a financial bind and degrades the quality of the content itself.

As a result, streaming media has become popular as a way to address this problem and ensure that the content is approved and of high quality. Entertainment app creation services ensure top-notch and authentic content for a low monthly/yearly membership fee, or even for free in some cases!

The entertainment and media business has exploded as a result of app creation, and it will continue to do so in the coming years. This has aided the creators and entertainment professionals, as well as provided individuals with a thrilling release.

App developers and entertainment industry visionaries can look forward to a bright future thanks to ever-increasing innovation and internet connectivity in even the most remote parts of the globe.

Do you have a great idea for a fun entertainment app? You might start by working with Consagous Technologies to create an MVP.

Reach out to us right now to learn how to turn your fantasy into a reality.